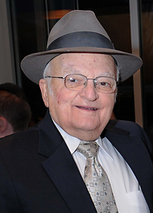 ​Rabbi Hillel received his semicha from Ner Yisroel after which he took a Rabbonus post in Brooklyn where he served with distinction for two and half years. In 1953 after the petira of his father, Rabbi Yehoshua Klavan, yd'l Rabbi Hillel Klavan was called to Washington to assume his Father’s position.

Rabbi Klavan served as the Rav of Congregation Ohev Shalom Talmud Torah during the challenging and turbulent years for Orthodoxy of the second half of the twentieth century. Rabbi Klavan faced those challenges steadfastly with charm and seichel. He remained absolutely true to the mesorah his father brought to America from the gedolei Yisroel in Europe. After serving as Nasi of the Vaad for many tumultuous years, Rabbi Klavan remained an honorary President of the Vaad Harabonim until his petira.
All content Copyright © The Rabbinical Council of Greater Washington.
The Rabbinical Council of Greater Washington is a tax-exempt 501(C)(3) nonprofit organization. EIN: 52-1807455