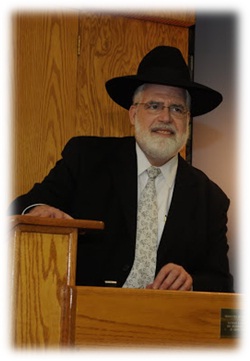 Rabbi Winter served as the Rav of the SEHC Knesses Yehoshua kehilla for over 30 years, from 1981 until his untimely passing in 2012.

Rabbi Winter was a devoted, compassionate Rav and leader who cared deeply for all members of the kehilla, working continuously for the community with great selflessness. Rabbi Winter was a close, life-long talmid of HaRav Alter Chanoch Henoch Leibowitz ZT"L, the Rosh HaYeshiva of Yeshivas Rabbeinu Yisrael Meir HaKohen (better known as Yeshivas Chofetz Chaim). He received semichah from HaRav Moshe Feinstein ZT"L.

Rabbi Winter inspired countless families and individuals, helping them strengthen their bonds with Yiddishkeit and increasing their observance of Torah and mitzvos. Rabbi Winter offered direction and counsel to many important community-wide religious educational institutions and service organizations, in and beyond the Greater Washington Jewish Community. He worked in kiruv in the business community, on university campuses, and in many other venues, always striving with the utmost dedication to bring Yidden back to Torah observance and understanding.

When it came to the dissemination of Torah or the opportunity to perform chesed, Rabbi Winter's energy and self-sacrifice knew no bounds. As director of the Rabbinical Council of Greater Washington, Rabbi Winter helped initiate the kosher meal plans now available at local hospitals and the National Institutes of Health. Rabbi Winter also oversaw the activities of the Greater Washington Chevra Kadisha and was instrumental in establishing a Jewish-owned and managed funeral home in the area. It was also Rabbi Winter who conceived of having a Shabbos and Yom Tov mikvah inside the White Oak Shul, which he then helped bring to fruition.

One of Rabbi Winter's most noteworthy, crowning achievements was his conceiving and founding of The Greater Washington Community Kollel, just a few years before his untimely passing. The Kollel has brought new energy and vigor to the community, serving not only the members of the White Oak kehilla, but the entire Greater Washington Jewish Community as well.

The Rav's love for disseminating the Mesorah was matched only by his love for his extended family, his kehillah. His passing leaves a gaping void in the community he lovingly served.
All content Copyright © The Rabbinical Council of Greater Washington.
The Rabbinical Council of Greater Washington is a tax-exempt 501(C)(3) nonprofit organization. EIN: 52-1807455