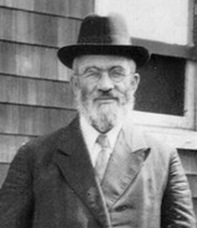 In his early youth Harav Yehoshua studied in nearby yeshivos, and became a disciple of Rabbi Aaron Walkin known as the " Pinsker Rav", a distinguished Rav and the author of the " Zekan Aaron" as well as other seforim.

Upon reaching the age of 17 he enrolled in the world famous Rabbinical College, Keneseth Bais Yitzchak- Slabodka, near Kovno, Lithuania. There he studied under Rav Chaim Rabanowitz (better known as Reb Chaim Telzer), whom he considered himself a talmid muvhak of. After Reb Chaim's departure to Telz, Shea Yanishker, as he was referred to in the yeshiva world, together with a group of eltere bachurim, was instrumental in bringing Rav Baruch Ber Leibowitz to serve as the Rosh Hayeshiva of Keneseth Bais Yitzchak.

He formed a very close relationship with Reb Baruch Ber that lasted throughout his lifetime. During Rabbi Leibowitze's visit to the U.S. in the early 1930's he made it a point to go and visit his Rebbe. In addition, he felt a strong sense of "hakoras hatov" to his Rebbe and the yeshiva and whenever possible he would raise funds to help support the yeshiva, even many years later when it had moved to Kaminetz.


In 1907 he married Feiga Devora Sheifer of Zezmer, Lithuania. She was the daughter of Reb Avrohom Shmuel Sheifer, one of the most respected citizens of the Zezmer community. Immediately following his marriage his rebbe, Reb Baruch Ber Leibowitz, as well as Rav Moshe Danishevsky, the Kovno Rov and a lecturer in the Slabodka Yeshiva, ordained him. Thereafter he continued his studies at the famed Yeshiva of Volozin then under the leadership of Reb Rephoel Shapiro, a son-in-law of Reb Chaim Voloziner, and the author of "Toras Rephoel". While there he received semicha from Reb Rephoel Shapiro.

His first position as Rabbi was in the small town of Zaskevitch, near Vilna, Lithuania. He served the community until the outbreak of World War I in 1914 when he and many members of his community were forced into Central Russia. They finally established residence in the city of Kursk, where he devoted his energies to helping refugees in the area.

In 1921 after they finally departed Russia He was appointed as the Rov in Gilvan, Lithuania a city near Kovno. He remained in that position until his departure to the U.S. three years later.

In September 1924 on the advice of his mother he emigrated, together with his entire family, to the U.S. In the years to come he would repeatedly praise his mother for this sagely piece of advice.

Upon their arrival in the U.S. they settled in the Bronx on the lower east side of New York City. They remained there until 1926, during which time he served as the Rov in one of the local shuls (Possibly they had been the ones who had served as guarantors on his papers to be allowed entry into the U.S.).

In 1926 he was appointed as a Rov in one of the local shuls in Burlington, Vermont. He served in this capacity until 1936
In 1936 he was appointed as the Rov of the larger Southwest Talmud Torah Congregation as well as the head of the Agudas Hakehilos of Washington D.C. He was to remain in this position until his passing 17 years later.
All content Copyright © The Rabbinical Council of Greater Washington.
The Rabbinical Council of Greater Washington is a tax-exempt 501(C)(3) nonprofit organization. EIN: 52-1807455